In a room, on a shelf, half-emerging from a box, sits a tower (block).

Entire flats from card flats, templates scored and folded. Window strips: printed, cut-out paper strips, glued lengthways. Entrance door peeling slightly at an edge, frayed. If there were any: trees the size of matchsticks. A tower approximately the size of four shoe boxes stood on their narrow ends and stacked in pairs on top of each other. A cardboard box slightly wider than the base of the high-rise rudimentarily re-fashioned to form a protective boundary with the words Not suitable for rain stencilled across the side. A thin layer of dust colours the white card grey. 26 storeys of silent stories.

On the shelf above are two cheap plastic storage boxes – the kind with the heavy-duty locking lids that one might find in a high street pound shop. Inside these boxes are filled with further boxes, a mish-mash collection of slightly differing shaped smaller boxes, such as matchboxes and old tin lunch boxes or slightly yellow-stained ‘disposable’ take-away boxes and the sort of boxes that a posh tea cup might arrive in.

Each of these boxes are filled with an assortment of miniature scaled objects and furniture. Grand pianos, with a set of stackable chairs; a collection of desks with slightly bent legs, old green-screened PCs, paper spilling in-trays and a scattering of wheeled office chairs; four plush leather sofas with those punctuating buttons, a heavy-set writing desk, with stubbed cigar ends in the ashtray and a green-glassed banker’s lamp; ornate period Baroque table tops with accompanying handsome wooden chairs, each carefully stained and varnished a deep brown; a series of empty hospital beds; a nicotine stained floral armchair, deep and worn; a mattress on the floor, unkempt; a street lamp on a curb, by a doorway; an empty baby’s cot. Each of these boxes a suggestion of a room, or the makings of a scene without players – empty stages, waiting.

Last night I dreamt I was a shoe.

To comprehend is to grasp the nature, significance or meaning of a thing. But some things, by the very nature of their scale, seem wholly incomprehensible. Scale feels relevant. Scale in relation to relative and proportional size; to climbing; to a musical arrangement in ascending or descending order of pitch; to weight and balance; dry skin flakes that fall from a scalp or the scales that form on the bottom of a kettle. I keep thinking about trying to grasp the sea in your hands, or the iceberg seen from the surface, of which its true size is hidden from view. 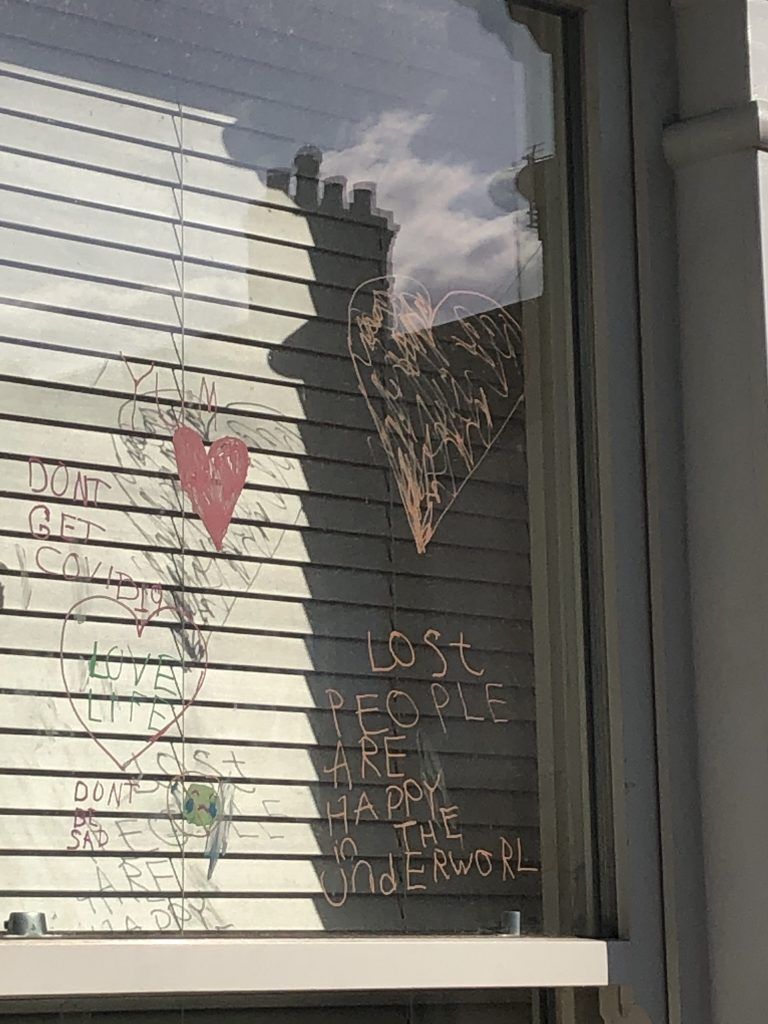 Recently I’ve been taking these walks through Nunhead and Camberwell cemeteries, strangely drawn to the dead, at a time when talk of death seems ever-present. I find myself spending more time reading the headstones – something about rows of strangers lying next to each other, whilst the living maintain the 2m. Strips of blue sky gaps between the treetops above remind me of something I read about ‘crown shyness’,  in which the crowns of some species of trees keep their distance from each other and so form attractive patterns of channel-like gaps in the canopy. Occasionally, you might come across a hastily filled grave, the earth dumped in big clay lumps – most probably a funeral since the pandemic. Unfinished. TBC. Words on hold, or perhaps forever unsaid?

From the inside of a street-facing window, in the sort of place where one might now expect a rainbow, are the words ‘LOST PEOPLE ARE HAPPY IN THE UNDERWORLD’ inscribed in orange crayon beneath the outline of a patchily filled-in heart.

I walked my old dog Zen around Nunhead cemetery for 16 years, which is more than 100 in dog years – up until last November when he died. Abandoned after the war, the cemetery became so overgrown  that when I was a kid I used to wonder why anyone would build a cemetery in a forest? thick trees now emerge out of graves with tomb-splitting roots. So many buried bodies, so much fertiliser for young trees. Literally life emerging from death.

When a whale dies in the ocean, its carcass will initially float on the surface, providing sustenance to hungry scavengers. As its mass decreases, eventually it will sink to the bottom. Once the body comes to rest, the leviathan cadaver can become home to entirely new ecosystems. Biologists refer to this as a whale fall. When we die we leak water. The skin tightens, and goes sallow and yellow as the blood that gives us colour, stops moving. As bodily functions cease, the muscles that keep the bladder and sphincter in control, release.

As you die you become lighter. Often when people are close to death, their bodies become more porous, lose weight, sort of become transparent, ghosts of themselves before they’re ghosts. We often think about death in relation to the earth, burying (in the West, at least). Cremation reduces the body into light fluffy ashes, which then blow in the wind. The body’s decomposition in relation to gravity. And how ash can be dissolved in water. Or inhaled. Or swallowed.

As I help the upside down grasshopper off its back and watch it hop away, I wonder about the Victorian dust-heaps that were once the size of hills. One by King’s Cross was supposedly so large that cart horses transporting dust to its precipice looked more like ants. Ash collected from households and used as filler in the making of clay bricks, which built new homes. Ash to fuel a fire – The march of bricks and mortar, whole neighbourhoods appearing as if overnight. Maybe these dustheaps were some kind of early progenitor of our recycling centres: homes made from home waste; the solidity of a cityscape emerging out of the ephemerality of ash, and dust. Maybe the heaps looked like grey icebergs  – to anyone who’d seen an iceberg before.

The weight of a Dustheap

A dance of scales

Last Christmas, I brought back some seeds from the country of my mother’s birth. It was my first visit for 10 years. The land was stricken and burning, the city air thick with the smell of bushfire, the sea dark with ash. Smoke plumes so large they created their own thunderstorms. Orange skies. Metal-melting-earth. On a walk in the park with my uncle, I stopped to photograph the dry, cracked clay beds of what were supposed to be lakes, that I remembered as a child. Looking up into the haze, he muttered that he’d never seen Sydney skies like these before. He’s lived there for more than 70 years. I bought the seeds in sealed foil packets from a tourist shop at the airport on the way home.

Ten weeks ago I sowed the seeds into three-inch-deep-trays, careful not to accidentally blow them away with my breath, as I scattered them into the earth, and covered the tray loosely with clingfilm. seedlings first started to appear two weeks later – a tentative green. The first couple to emerge turned out to be weeds that presumably lay dormant in the potting mix. I left them to grow, too. I read somewhere that the small and weak should be plucked out to encourage the strong to prosper. On the tv three old white men stand at podiums announcing something about herd immunity and saving ‘the economy’. The economy for whom? Two weeks after the first emergence, I repotted every seedling into larger trays, the small and large, the slow and the vigorous, the invited and the unannounced, the sick and the healthy. 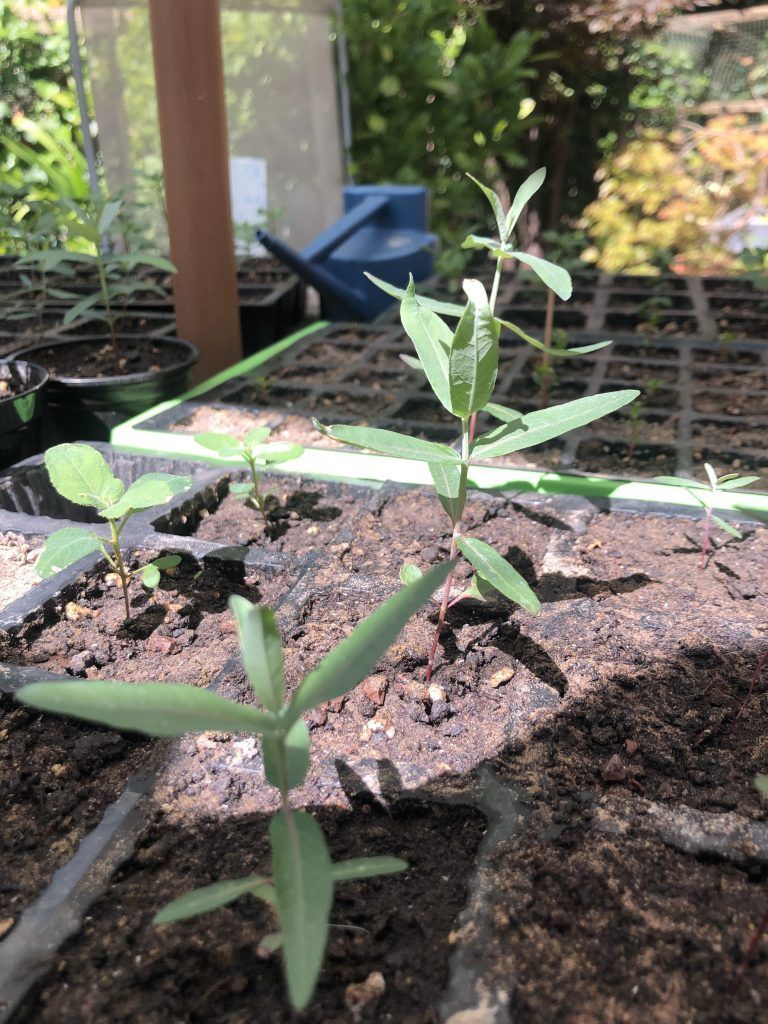 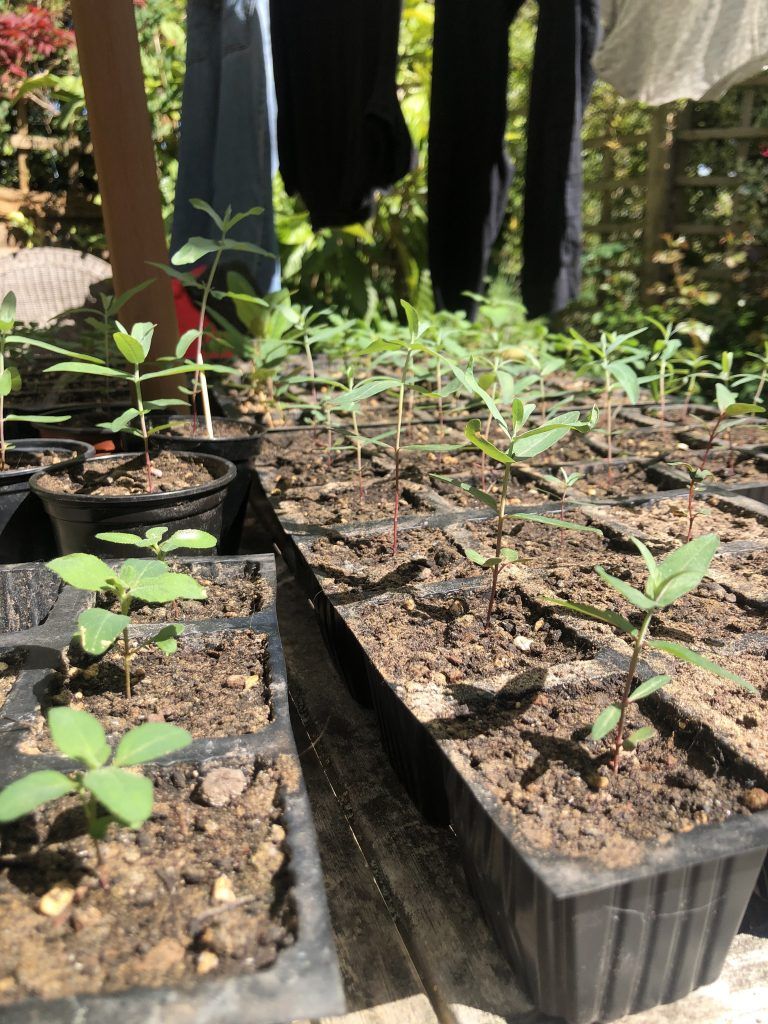 I suspended a fluorescent lightbulb so it sat just above the plants. Wiped down a fungus that spread, and nursed the infected plants. Checked the dryness of the soil twice a day, and watered from the bottom up. Not wet, not dry – always moist. Re-potted tiny stems with tweezers using toothpicks as aides. Moved trays outside in the morning sun, and back in again at night. Guarded from snails and caterpillars. Fed them once a week.

Gradually, at first tentatively, yet now enthusiastically, they responded back.

Almost a hundred baby trees, from 8 varieties of Eucalyptus, not much bigger than matchsticks : tiny life. It feels somewhat absurd or affirming or something, to nurture new life small enough to fit into a teacup, in the knowledge that one day, with enough care, it can grow to be larger than a house.

In 2013, a great storm washed back the sands of a Norfolk beach to reveal a set of human footprints. They were the oldest known of their kind yet discovered  outside of Africa; possibly more than 800,000 years old. A professor from the Natural History Museum likened the discovery to ‘a needle in a haystack’. The varying sizes suggested that they were made by a small family group walking up the beach, presumably having made their way over to Norfolk via a strip of land that once connected Britain to continental Europe a million years ago. It is believed that they were members of the proposed archaic human species Homo Antecessor, which has long since vanished. Two weeks later, the footprints were swallowed back up by the sea. 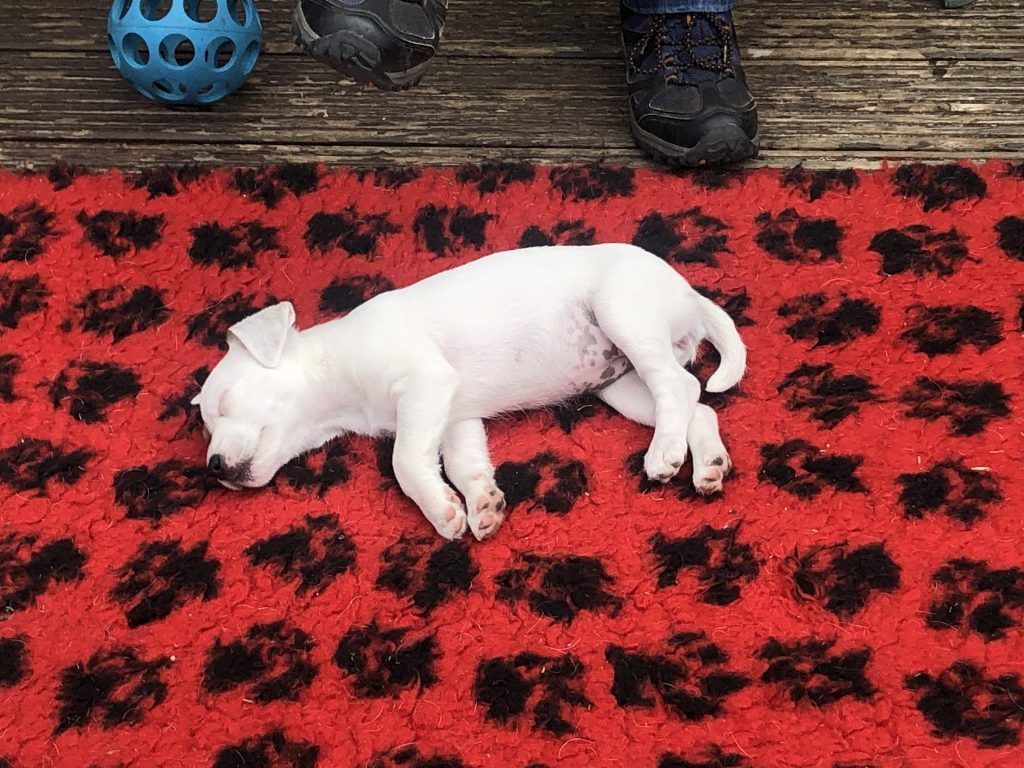 Last Friday, Indigo arrived in my life, 6 months after Zen had left. She lies at my feet asleep as I write this ending. On her first night I put her in Zen’s old bed and gave her his favourite blanket and watched as she sniffed and took in his scent. Whilst they can never meet physically – I like to think that maybe through his scent, Zen can pass something over to Indigo, maybe a small reassurance and some of the wisdom that he gained over the years, a sort of spiritual-scent-handshake-embrace, that whilst one story may end, it might inspire the next, as it emerges, and grows into view.